Tourist excursions in the Auvergne region 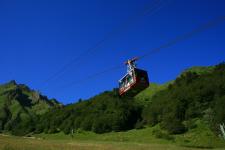 The surroundings of Les Camélias have far more to offer than a stunning nature alone. Such as a visit to the towns of La Bourboule, Orcival and mediaeval Besse. Each Wednesday morning an authentic French country market is being held in the village of Egliseneuve d’Entraigues. Each Tuesday morning as of June 18 up to September 24 an organic market with local producers can be visited in La Bourboule.

”Brocantes” and “vide greniers” are often organised in the area in summertime.

In the immediate vicinity of Les Camélias

Besides these visits that are many more touristic excursions to be made in the immediate vicinity of Les Camélias. At only 4 kms of Les Camélias the departure of the cable car to the summit of the Puy de Sancy is located. The Puy de Sancy is with its 1885m the highest point of the Central Massif. From Le Mont-Dore itself the oldest and very well maintained funiculaire (cable train) departs. The climb in this in the Belle Epoque style decorated train takes 10 minutes.

The big Parc Fenestre in La Bourboule is also worthwhile visiting. A no less than 12 ha large, landscaped park with many children's playground equipment.

Just outside of Le Mont-Dore a number of waterfalls can be visited. Like Grande Cascade, with 30 meters one of the highest waterfalls of the Auvergne. The Cascade du Queureuilh and Cascade du Rossignolet can be admired via a short circular walk.

The natural Source Croizat hot spring is located between Le Mont-Dore and La Bourboule. The hot spring is freely accessible and the water has a comfortable, constant temperature of 40°C.

There are many lakes in the area. Some of them are se called "maars", crater lakes. Examples include Lac de Servières and Lac Pavin. Lac de Guéry - 7 kms from Les Camélias - is a reservoir. At this lake the fishing season is opened on the first Saturday of March with a for France unique event: ice fishing.

In some lakes one can swim: Lac Chambon, Lac des Hermines at Super-Besse (July and August), Lac Aydat and in the Plan d’eau of La Tour d’Auvergne.

Furthermore, La Bourboule has a swimming pool with sauna and Turkish baths.

The Dordogne river originates at the foot of the Puy de Sancy at 4.5 km from Les Camélias. At this point two mountain streams – the Dogne and the Dore – come together to begin the Dordogne river.

The fortress of Murol dates from the 8th century and is superbly situated on a rock.

There are many churches and basilicas in Romanesque and Gothic Revival architecture to be visited in the area. Sometimes with a surprisingly colorful interior such as in the 7th century church in Egliseneuve d'Entraigues. The basilicas of Saint-Nectaire and Orcival are worth a visit for lovers of Romanesque architecture.

One eats and drinks well in this region. There are many specialty shops selling locally produced cheeses and sausages in Le Mont-Dore. But there is also, for example a cookies store - the Biscuiterie du Sancy – selling a wide variety of sweet treats.

At the La Ruche des Volcans in Saint-Sauves d’Auvergne and at La Ruche Auvergnate in Montaleix honey is produced and used and sold in a wide variety of products.

You can also follow a signposted cheese tour and visit a cheese producing farm. The Auvergne region has 5 cheeses with the AOP (Appellation d’Origine Protégée) label. The cheeses are Saint-Nectaire, Bleu d’Auvergne, Cantal, Salers and Fourme d’Ambert.

Delicious blue cheeses are being produced at the Ferme des Croix de Chazelles in Avéze.

At La Chèvrerie des Monts-Dore in Murat-Le-Quaire one can participate in the daily life of a goat cheese farm and of course taste goat’s cheese. During the season lambs can be bottle fed.

Les Camélias is situated in the volcano area of the Puy de Dôme. As of many locations you will have a view on the Chaîne des Puys (Puys chain); a more than 45 km long chain of about 80 ancient volcanic hills. The Puy de Dôme forms the centerpiece of this chain.

The summit of the Puy de Dôme is accessible on foot or by train. Because the train tracks spirals around the Puy de Dôme passengers have continuous alternating views during the train ride. Information can be found on the (English) website of the Panoramique des Dômes.

In Saint Pierre Colamine the Grottes de Jonas can be visited. The more than 70 spaces are spread across five levels and linked via corridors and staircases. With a special voucher, guests of Les Camélias pay the group rate instead of the more expensive individual rate.

In the 4 caves of the Mystères de Farges the mysterious history of these caves is explained in detail through a sound and light show.

And in Saint Nectaire the Grottes de Cornadore can be visited. The 2000 year old caves were already used by the Romans to bathe!

An overview of a few museums that you could visit during your stay:

And then there are also many artisans which can be visited: glassblowers, potters, enamellers, wooden shoe makers, painters, leather workers, and so on.

Consult here our availability, select an apartment and submit a reservation request.

The time has come to say goodbye. From the 1st of July we are no longer the owners of Les Camélias.