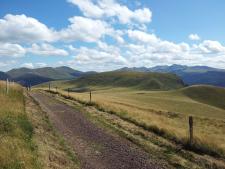 Mountain biking on a volcano

The Sancy massif in the Auvergne has a volcanic origin and is surprisingly challenging and varied. Straight out of our accommodation in Le Mont-Dore you can make fantastic mountain bike tours. Open tops with panoramic views alternate with steep escarpments, usually in a forest, where also most of the single track descents can be found. There are broad paths but also technical single tracks on rocky underground where walking sometimes might be necessary.

An extensive network of paths

The highest mountains in this part of the Auvergne are almost 1900 meters high. The average meters of climbing is between 300 and 400 meters and can go up to 700 meters. There is an extensive network of trails which are fantastic for mountain biking.

Below a preview (the area definitely also has more challenging trails!): 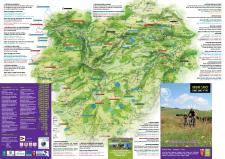 There are furthermore also 437 km of signposted mountain bike routes in the Sancy-massif. Spread out over 47 routes and close to thirteen municipalities, including Le Mont-Dore.

Out of Le Mont-Dore the following signposted routes can be cycled:

Obviously, the different routes can be combined. There is also a connection with the routes from La Stèle and La Bourboule.

An overview of all signposted mountain bike routes of the Sancy massif can be found on the website of the Sancy Massif.

More (French) information can be found at the website of the Sancy massif. 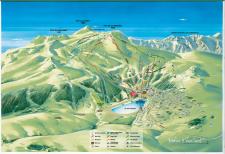 Super-Besse offers a bike park and 5 downhill tracks; 2 blue, 2 red and 1 black track. A ski lift takes mountain bikers and mountain bikes to the top of the tracks. A real must do for those who want to improve their downhill technique. A visit to these downhill tracks can be combined with a day trip from Les Camélias. For the blue and red runs a dual-suspension XC ATB will do.

In the video below you can see the downhill pistes and the Super-Besse Bike Park. The video also shows the signposted MTB routes in the area:

Consult here our availability, select an apartment and submit a reservation request.

The time has come to say goodbye. From the 1st of July we are no longer the owners of Les Camélias.