Curious how the ski slopes currently look? Look at the webcams of Le Mont-Dore and Super Besse.
1 Januar 2009

While we're still in the middle of the winter sports season herewith already a news item for the 2009 cycling season: Les Camélias will offer complete packages for groups up to 10 persons. Fully taken care of from breakfast via a packed lunch up to a 3-course dinner. You will have to do your own cycling! Please contact us for more detailed information and pricing details.
5 Dezember 2008

Since a few weeks our website has put on his winter coat. We also have the taken the opportunity to adapt the menu to create a more user-friendly website.
26 November 2008

It has been snowing the last couple of days and as a result the ski areas of Le Mont-Dore and Super-Besse will open Saturday November 29.
25 November 2008

Yesterday and today the first snow of this years winter sports season fell. Herewith a pictures of the stairs in the Les Camélias garden. Let’s hope there will be more snow in the next week so the ski runs can open on December 1st. 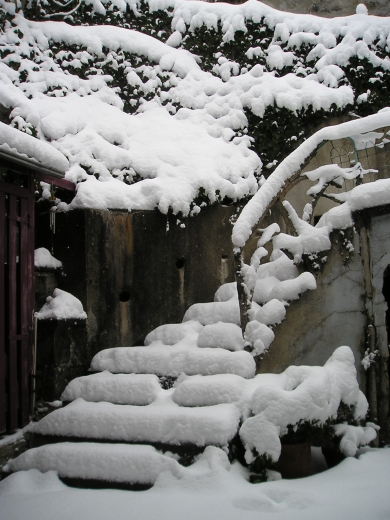 Currently we are busy replacing the showers in the apartments 6 and 9 (2nd floor). The old showers, a kind of telephone booths, are being replaced by spacious, quarter round cabins with thermostat tap. 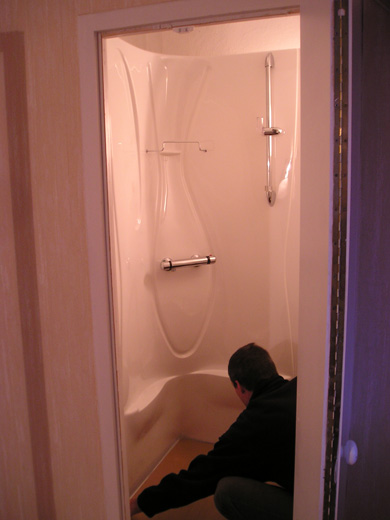 Recently, the kitchen windows of our apartments have been replaced. Like the bedrooms the kitchens are now equipped with double glazing. We are ready for winter time!
25 September 2008

Also this winter many events are organised in Le Mont-Dore and environs. From sledgedog races to a running competion on the Puy de Sancy and from the Sancy Snow Jazz Festival to the national day of the snowshoeing. See our calendar for more information.
15 September 2008

The Auvergne region is also very beautiful in the autumn. The trees will swap their green color for a real color spectacle. Below an example of the colours in the vicinity of the Tuilière and Sanadoire rocks. 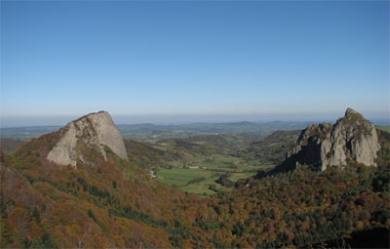 Lately the new Les Camélias bike storage has been often used. Below a picture. 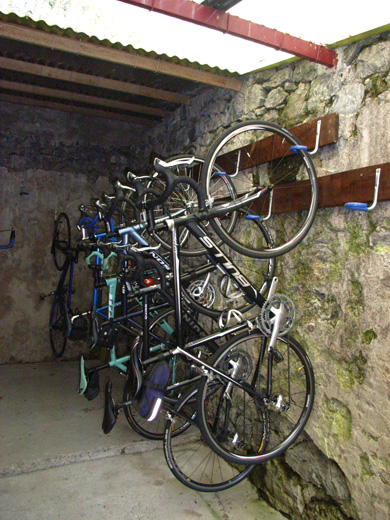 The route for the l'Auvergnate cyclosportive has been changed. You can read more about the new route on Cyclosportives on the road-page. For this cyclo we have a special offer. For more information read the news item below.
28 Juni 2008

On August 23, the cyclosportive l'Auvergnate will take place. The start is in La Bourboule at 6 km from Les Camelias. Especially for this cyclosportive we offer our guests a pasta meal on the eve of the cyclosportive, an early cyclists breakfast, a pasta buffet upon returning from the event and a light evening meal. Costs of all this: € 36, = including a drink with meals.
22 Juni 2008

Cow with calf for winner Tour-stage!

The first cyclists have done the Les Camélias climb time trial. The time of Martijn Tusveld - only 14 years old - might be hard to beat. The time trial goes from Le Mont-Dore to the Col de la Croix Morand and covers 6,7 kms and 370 meters of climbing. This year the col is part of the Tour de France stage of 10 July.
7 Mai 2008

Some new photos have been added to the website and we have amended the page with travel information: a touristic route to Les Camélias has been added. We have also added some entries to the calendar.
12 April 2008

For greater flexibility when having groups staying at Les Camélias we have purchased some single beds. And since we want to guarantee a great night's sleep to our guests, many different mattresses were tested in the store. A strenuous activity.
25 März 2008

Not only is the summer calendar online since a couple of days, our website is also ready for the summer season. Summer activities are shown more at the top of the menu, the summer logo is prominently present and pictures have been replaced by more sunny ones.
20 März 2008

There are many great events this spring and summer near Les Camélias: road bike and MTB rides, runs, hikes, but also a competition for pedal cars in the streets of Le Mont-Dore and of course the passing through of the Tour de France on July 10. More information can be found in our calendar.
7 März 2008

It has snowed heavily in recent days, it is snowing at the moment and there is more snow expected. Excellent circumstances to spend the Easter weekend at Les Camelias in Le Mont-Dore and to go skiing on the Sancy vulcano.
25 Februar 2008

On July 10 the Tour passes in front of Les Camélias! The cyclists will climb the Col de la Croix Morand which happens to be the Les Camélias Climb Time Trial. The finish is later that day in nearby Super-Besse.

On the website of the Sancy-massif (www.sancy.com) you can find some nice panorama movies. To be watched via this link.